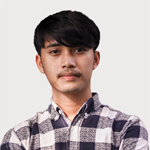 Mr Nuth received a Bachelor’s degree in Economic Development from the Royal University of Phnom Penh. During his study, he worked as an enumerator and research assistant in a number of research projects. He also worked as an intern in Governance Unit at CDRI for six months. Further, he joined an exchange programme in Hanoi, Vietnam, and conducted a small ethnographic research on urbanization. Mr Nuth has particular skills in graphic design and photography as well.